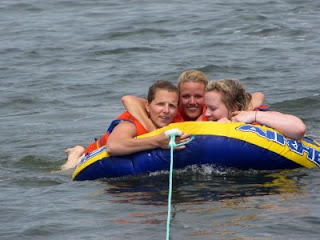 It's a long time since I've had such a fun day as yesterday turned out to be . Boats full of people gathered for an annual poker run to aid the Northumberland arena. Each boat called at four ports to receive five cards and the best poker hand won.

I'd estimate thirty to thirty-five boats were present at a selected site to spend the finale. Most had coolers, barbecues, stereos, water toys, and lots of happy party-goers. Children and dogs had fun, went for swims, lay on water lounges, and visited back and forth on other boats with their keepers. 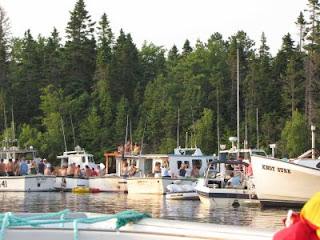 Our boat had sixteen aboard and we had a ball. The brave ones got towed behind the boat on a boating tube. My daughter is in the middle of the threesome shown above. I think I was the only one not in for a swim. I may go for one at my own beach later to try and cool off after supper. It is hot and humid today, more;so than yesterday. We share good food and lots of fun times. This is what summer is meant to be. The ride back to the home port was wonderful with the setting sun and promises to meet again next year. 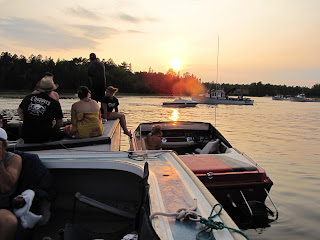 This calls for boat songs does it not? One of my all time favorite pieces of music is Phoebe Snow's version of the Ira Gershwin song, There's a Boat That's Leavin' Soon for New York. In my opinion it is the best version of the song out there. I also like the Holmes Brother's version of Lyle Lovett's song, If I Had a Boat. Hope you like them too and I hope you get a chance to get out on a boat this summer.
Posted by Cuidado at 4:12 PM

Labels: If I Had A Boat, Phoebe Snow, The Holmes Brothers, There's a Boat That's Leaving Soon

What fun! And it's interesting to compare this description of a PEI summer day with some of the ones I remember about winter!

Ha! It certainly is different. We get to stand on the ocean instead of float on it! Both are nice.

I know nothing about poker, but your photos show how much fun you had. Our summers are short enough, aren't they, that we have to grab what we can! Here it is August and I think this weekend feels like summer for the first time!

It was wet in June and early July but the last couple of weeks have been scorchers. It continues today for another big event I'm attending - a 25th and last annual party put on by friends.

Looks like a blast Mom. A day in a boat is about as good as it gets.
- A

It really was fantastic, A, with lots of good company. Twenty-fifth and last seafood party in DeGros Marsh was held this past Sunday. It too was fun.

We went ofr a couple days to a Cenvedish-like beach called Port Cobourg. There was a sandcastle building contest, music on the beach, and great water with lots of waves. We all had a great time! The kids love sleeping in hotels more than I do, so that was fun too..
- A

I'm glad you had a good time. Next time you'll have to go to Wasaga.