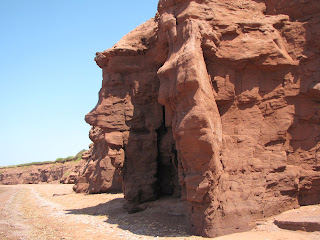 This has been a great week for me. A dear friend and I have been exploring some Island beaches and loving every minute of it! The photo is of West Cape where I own some beach land. It's been five years since I visited and it certainly was about time. The beach and water were both wonderful and as great as I always imagine. I usually walk to West Point and back but my friend was only cool with walking half way. The cliffs were amazing as usual but we did not reach the dunes. The photo shows a pretty good face profile on the left.

We visited two other great beaches this week as well. Both were new to my friend and one was new to me. I'm not even sure if I could find that one again. I just took some roads that I knew would eventually reach a beach. What an amazing place this island is in the summer. The sheer beauty is one thing but the fact that you can drive to the end of so many roads and find a beach to explore is amazing. I'm a lucky woman.

It is thirty-one degrees at the moment and I would say the beaches are full again today but I need a day out of the sun. I'm listening to music, uploading tons of photos and catching up on a bunch of stuff. I have a glass project to start on Monday. Life has to be taken care of, even by beach bunnies.

The scenery has been beautiful and if you click the links to my other blogs, An Island Walk, Just Picture It, or Pictures and Pursuits (also listed on the right) you'll see, in the next while and also from the past weeks, some pretty awesome Island spots. Still Water by Daniel Lanois describes some of these shots. The Water by Feist describes most, I'd say. When talking about such Canadian beauty it's nice to extend it to the musicians, don't you think?
Posted by Cuidado at 3:16 PM

You are in a great place these days, Cuidado. So glad you're having so much fun!

Sunshine will do that, Ralph.

You are indeed a lucky woman - and we're lucky for your willingness to share your wonderful island!

That's sweet to say, Carol. I moved here almost 33 years ago and it was the smartest thing I ever did for my soul.

How big are those trees now in West Cape, Ma??
-A

Really tall, like the trees across the pond, A