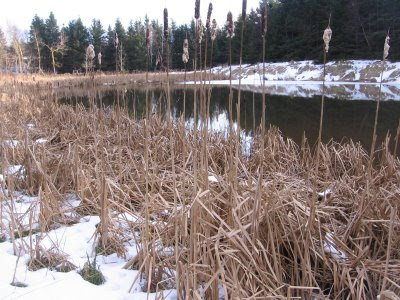 Rural Prince Edward Island has looked like this for a week or so but is to change overnight. We're going to usher in the New Year with a big blizzard. We had a storm last year too but it started early in the day on NYE and a lot of snow fell. I was upset with my son last year for driving into town in the midst of the storm. This year it is 7:30 and hasn't even started to snow yet. People will be able to get to their parties and find themselves storm-stayed there, at a New Years Eve party. Nothing wrong with that!

I'm happy to be heading to a new year. That is the time I always get the clean slate feeling. Some people get it in September when school begins but I feel it more in January. I don't make resolutions but pray a bit and think about what I hold hope for in the future for both the world and myself. I'm a Capricorn and my birthday is near so it's become a time of passage for me each year

Music to end a new year could be from a large varied pool of songs in my mind. I've chosen songs from a few categories. I want to say goodbye to 2008 in a formal way so Melody Gardot will help say it for me in Goodnite. I'd love to party, but at the same time, don't want to be out in a storm so have decided to stay home. I'll play this song instead and groove a little bit - World Party by The Waterboys. I can usher in a new year just fine when I think that maybe a good part of the world sees this time as a new beginning and will strive, just like me, for a Great New Year! All my hopes and prayers for a Great New Year is now on it's way to you.
Posted by Cuidado at 4:25 PM

Happy New Year, Cuidado. I hope things run as smoothly for you for all of '09 as the end of '08 did. I really enjoy your musings and your songs. And thank you especially for the hints and recipes and music you've shared with me!

Thanks, Ralph. I'm glad to have met you this year and hope your year is filled with all the best. I hope we can still continue to share our music a while longer.