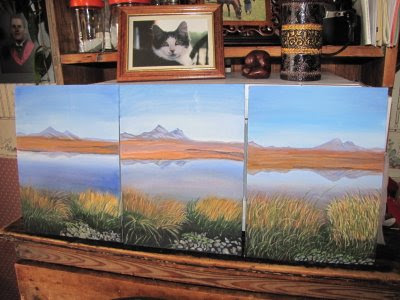 A regular post for a change. The fact that it's a Friday in fact and also in my mind and Friday the thirteenth and the first day I've had the house for myself, without a guest for three weeks, all add up to make this a great big day, 'a large day', as they say here on the Island. I've loved every day of the last three weeks but today is as described above.

I had a bath in my old fashioned, claw-footed, iron tub for the first time in three weeks. I played Blossom Dearie up loud while I soaked. It was great. I'm getting paintings ready for varnishing so that I can change my painting studio into a glass studio. All the painting infrastructure that has been present for the last couple of weeks has to be put away. We turned the kitchen table into art central and ate in the den in front of the TV for the duration. It will take me at least a week and a half, maybe two to get the house turned around and the studio ready to do glass.

I have to enlarge and finish drawing the design my aunt and I worked at the day after she arrived. She helped me with the problems on the smaller sketches and I've hopefully got it solved and can fix it fairly easily. Wish me luck.

By now have you guessed which painting in the photo is mine, my aunt's, and my sister in law's. There was a clue last week during the process. Let me tell you that these are not yet finished. New paintings to show tomorrow.

For the song of the day I am again choosing the one I chose nine days ago in reference to my aunt. The first sentence said in English is "I bought you some paints to paint with, on the nights that it's cold outside." The song begins in French, my aunt's and father's mother tongue. It is a perfect song for us in ways. Again, here's The Collection Of Marie Claire by the great Daniel Lanois.

The two new songs aren't new to me but they're new getting on here. I've been dancing today too. I danced for only ten minutes while my aunt was visiting. One day I just couldn't help it and I told her if she was hearing some strange breathing patterns it was me in the next room dancing. I felt a bit embarassed and didn't keep it up long.

The first ballady dancing song is Do I by Alice Smith. It fits my dance mood today, a more full-of-feeling style. The other is from one of my favorite all-time movies, Frida. Short and sweet, it's Solo Tu ballad by Elliot Goldenthal fits perfectly/ The file is listed as Lila Downs because I put it under her name when I bought the Frida soundtrack but it is an instrumental from the soundtrack. Now doesn't that sound like a good mood to be in?
Posted by Cuidado at 5:22 PM

Labels: Alice Smith, Do I Ever Cross Your Mind, Solo Tu. Elliot Goldenthal

was at the movies so I missed your call. The paintings look great!
I will call you tomorrow.
Love you

OK, Darling. Also, I remember where your other number is.

You must ahve real talent. I can't find the blotch anywhere!
-A

Ha, A, just found your comment. Mine is the 'different' one.