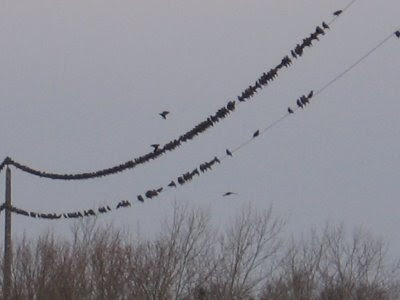 I've been watching the usual November flocks of blackbirds. They're gathering in preparation for flying south. It occurred to me today that that is exactly what is going on around this house. My son is going to Mexico and I'm flying to Florida. We're just like those gathering birds, clearing up loose ends, and making plans, in our own separate ways. I'm leaving after he returns so there is some continuity in the house, but we've both been very busy beavers, getting things organized for our journeys. I've been filling and have finally mailed Christmas boxes. My computer break has gone far in getting this done in a faster manner.

I have the latest version of Windows Media Player and am having a heck of a time finding my way around. I had kept the old version 9 forever but it can't be downloaded on XP anymore. It's a sad day. My son thinks I should be accepting these upgrades when they come out but I tend to hang onto the familiar. I didn't upgrade to Firefox 3 either, until now.

We have two songs today by woman singer-songwriters who are very similar in that they beautifully paint a picture with their words. These songs are lovely vocal stories. First Azure Ray with November; this is a duo not a single woman and Kim Richey, with Mexico. Both are worth a listen.
Posted by Cuidado at 4:14 PM

It is easy to imagine those wires hitting the ground under the weight.

By the time they reach their destination, Michael, they will have lost a bit of that weight.

Welcome back, Cuidado. Speaking of those upgrades: I've discovered the best thing to do is just go with the flow. Obsolescence comes lock, stock and barrel with computers--the machines themselves may last several years but you really get the best out of them if you just let the upgrades happen.

I've recently switched to Firefox, too, and am amazed at the improved speed. I just have to remember which of my usual haunts are not Firefox friendly--luckily, not too many.

Ralph: Itr's good to be back. I've been on Firefox since the beginning but hadn't upgraded to Version 3. I'm still having difficulty with Windows Media Player though and I use it constantly.