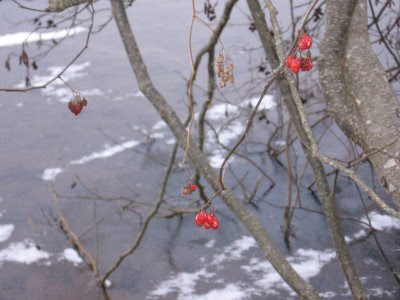 We missed PEI's first taste of winter two nights ago, but tonight - the snow is coming. I wanted it to hold off until the airplane I boarded was heading south; four more sleeps! My daughter, a snow lover, was very excited last week when she was getting her first taste. I told her that I find it hard to believe that she came forth from my loins. Did none of me rub off on her?

I just want to escape it. Every year, the same thing. I complain about it and complain about it . "If only I didn't have to drive", I say over and over. All the while that I'm complaining, I do what I have to to live safely in winter's culture. Today I got my snow tires on. I have my kit in the trunk for emergencies. The shovel is on the deck. I haven't resorted to socks yet. That is the last gong for me. The three week escape I'm heading for will be precious to me in the respect that I will miss three weeks of driving in snow. Ha! What am I thinking? I trade it for three weeks of driving in a couple hundreds percent increased traffic on roads I'm completely unfamiliar with!

White Snow by Ben Weaver is perfect for today. Might as well keep it real. I hate winter but accept that I live in it's throes. I don't think it's forecast to be this extreme but Snowed In by Joel Plaskett will add to the Maritime tradition that if you talk enough about it - blow lots of hot air - a storm won't come. We'll see if it works.
Posted by Cuidado at 4:25 PM