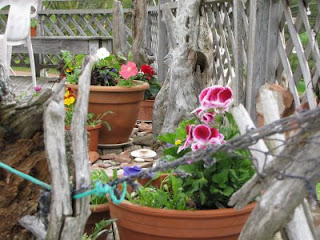 My day is not nearly done in the garden. Everything takes longer than I plan it seems. I don't know if I'm slower, more careful or what. It took me longer than usual to select the plants this morning and the afternoon to plant them. The photo is a sampling of the terra cotta pots I planted today. They have a bit of transplant shock but will be fine in a couple of days. I spent $82. and did not buy tomato plants as planned. I still have so much work to do before planting them so I'll let someone else worry about watering the seedlings. I'll buy them when it's time.

I keep saying this but driving in the countryside at this time of the year is so beautiful and gives one such an uplifting feeling. Spring! By far my favorite season. It just makes everyone and everything wake up and I sure do take notice, being the visually stimulated person I am.

I had music to accompany my planting of course and was groovin' to Gotta Serve Somebody by Mavis Staples. It made my mind wander to the late seventies when the song was first released by Bob Dylan on Long Train Comin' and I was playing it non-stop. To me it's one of his best albums but for lots of people it signified that Dylan had 'gone religious' and thus did not like this period. I love this song and the whole album.

Just a thought. I wonder why planting and gardening is called having a green thumb. As far as I can tell it adds up to brown fingers and thumbs. Could I be doing something wrong?


Back to work tomorrow so I won't be here till Monday unless it turns out I don't have to work on Saturday then - no excuse.
Posted by Cuidado at 4:20 PM

Oh! So pretty! I got my annuals planted on Friday afternoon. It is a wonderful feeling to look around and finally see flowers.

These that I planted are all for the deck. I have perennials everywhere else. I love flowers and grow them mostly for cutting. Thanks for dropping in, Nan.

"According to the Old Farmer's Almanac, [green thumb] probably comes from one of two sources:

Either its origin is linked to the reign of King Edward I of England, who enjoyed fresh green peas so much that he had half a dozen serfs working to keep him supplied, a prize going to the one with the greenest thumb, presumably from hours of shelling; or it comes from the fact that repeatedly handling clay pots encrusted with algae will stain a gardener's thumb (and probably fingers) green."

How I envy your gardening ability!

Oh, thank you, Carol. I did handle a lot of algae covered pots yesterday but the brown won out. You're a wealth of information.