Change Is Apon Us? 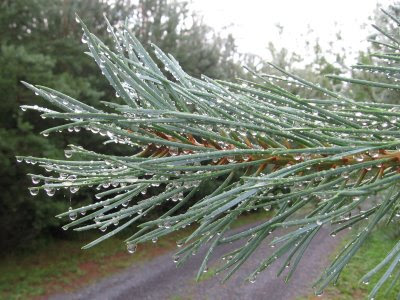 What a difference a day makes. We've had a huge thaw, going from - 20's to +4 overnight. I've been busy inside all day and did not get out for photos but the ice that formed last week is completely gone.

My Sis-in-law just left. We solved the world's problems, discussed what we're having for dinner and that's pretty good for a Monday. I'm so excited about my aunt coming this week. Her room is made up, fresh and comfy, and I'm calling her tonight or tomorrow for the grocery list. What is her favorite juice, etc? I love them all so would be happy to get her favorite. Same with everything else on the grocery list from meat and seafood to vegetables and pastas. What are her favorites? I'm very easy to please and will eat anything but bananas. I will even eat them, on occasion.

I urge you back to a past post (with a recipe you must try, Ralph, in the spring) with some songs I'd recommend for this post. Since I can't have those, here's two more. Yes these are the songs, I'd choose.

On January 16th, just a few days ago, I had Bruce Springsteen's, Streets of Philadelphia, saying it was the best version of his song. The movie, Streets of Philadelphia, had two great songs on it's soundtrack. I heard at the time that the reason they had two hit songs with almost the same title, was that they could not turn one of them away. They were both incredible songs. Still are. Here's Neil Young with Philadelphia.

My other song choice is to draw attention to the big event happening in another American city for our American friends tomorrow. This Aretha album was my favorite album for about two years in the early seventies. Nothing could take it's place. The song of the same name is my tribute for Barack Obama and his promise of change in the American people. If the American people change so will we, their Canadian neighbours and the world. Here's Aretha with, Young, Gifted and Black. Good Luck, Obama. You'll need it.
Posted by Cuidado at 4:03 PM

How exciting to have company! One of these days we may even pop by...LOL...We're digging out of 15 inches from the last storm.

I'm glad we got the rain, Carol. I'm so looking forward to my aunt's visit. I'm very happy to be close to so many aunts in spirit if not in miles. That I get to visit one and one gets to visit me in the same winter is awesome.

What a perfect song choice! On behalf of all your American readers, thank you, Cuidado. He'll be good for you, too!

I remember that rhubarb recipe. I actually have some rhubarb from the yard in the freezer--I may be making it soon.

I do hope Obama is the man who will begin the change America needs to make in the world.

You'll love the rhubarb torte, Ralph. I don't make it anymore because I'd eat the whole thing. Yum!