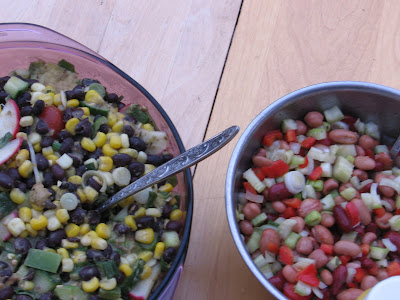 I had a lovely day in town with my sister-in-law, a fabulous hot and spicy lunch and I picked up some good deals as well. I needed a memory card for my camera and got a 2 GB SD card for $9.96. I bought two. I purchased my 512 MB card for $25.00 on sale a couple of years ago. Amazing, eh? I also wanted a camera bag. All the bags I was seeing were too expensive for what I was getting so I decided not to get one. Later I was in the dollar store and picked up a nifty little bag for $1.oo. It will work perfectly well for the time being.

We had rain overnight and it was 6 degrees today. Perfect snowman snow. If I'd been home I might have made one. A friend and I made a woman a couple of years ago that lasted most of the winter. She was pretty special.

Every once in a while I have a song that really moves me, becomes a favorite and I play it a whole lot. About three of four years ago it was Lucinda Williams' song Joy but the fabulous version by Bettye Lavette. Well, another Bettye LaVette song has got me by the heart again and I'm happy to share. Maybe it won't do anything for you but I find her delivery so compelling. I think she is just the greatest and wish she were more well known. She's been performing since the 60's but didn't become a household name like Aretha, Diana Ross, and a host of other 60's soul/r&b women. She's still very active and I would really love to see her sometime. The song that I am now enthralled with is Talking Old Soldiers.

Another woman I'd most like to see live is Lila Downs. Though she's half American, she dresses in traditional Oaxacan folk costume. She always has a fabulous band too as I've seen a lot of her on YouTube. I think it's only a few days ago I had Lila here but what the heck, it's a new year. What I've chosen, Pa Todo El Ano, is a live recording and easily shows why I want to hear her.
Posted by Cuidado at 3:54 PM

It was from the summer.

I'm with you on Lila Downs. She must put on quite a show. And what a voice! So glad you introduced me!

Ralph, Have you checked out her YouTube performances? Fabulous!

Been meanjng to do that forever, Cuidado, and finally did upon this suggestion. She's as compelling as I thought she'd be. Interesting--she seems to have been cultivating a "Frida" look there for a while--the eyebrows, braids, etc., and now she's softened it up quite a bit--an improvement, IMHO.

Yes, she has the young Oaxacan girl look rather than the dated Mexico City of the 40's and 50's that Frida portrayed. She is a fabulous performer.