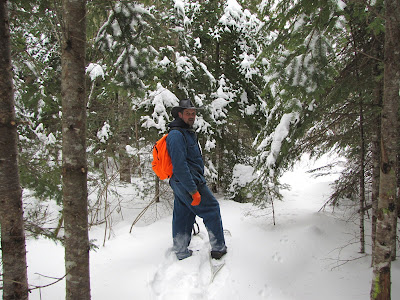 I'd say it's about time for an update. My aunt arrived safe and sound though an hour and a half late. She and I have our birthdays a day apart and are so much alike it is scary. With our 'let's get to it' attitude, we immediately got to it and finished up the designs I was having trouble with. I presented them to my client, got her design and colour choices and started to pack for our road trip.

We left Monday morning. It was Aunt J's first trip on the Confederation Bridge. She was very impressed as she thought it was a couple of kilometers instead of fourteen. We arrived just in time for supper at my dad's. My sister was there too and we exchanged gifts. We are easy to buy for each other. I collect vases; she collects cobalt blue things. She gave me a very unique vase and I gave her an over two foot tall, cobalt blue vase.

We visited all kinds of friends and relatives and if I drank tea, I'd still be floating. I do eat cookies though and am five pounds heavier than when I left PEI. It was really good to catch up and get more genealogy information for my addicting hobby.

The highlight of my trip was snowshoeing with my brother. My father was upset with me because we were in the midst of an extreme cold spell but I reassured him that we were dressing for the conditions and would turn back if we got cold. We were out two hours and my brother wanted to do another trail but I'd made the mistake of drinking coffee before we went out and it badly wanted to exit my body. It was way too cold for a woman to pee in the woods so we went back. Due to lazing around drinking coffee and waiting for the temperature to rise a bit, it was also past the time when I said I'd be back at Dad's.

We left early yesterday as Aunt J wanted to visit an old roommate who lives in Moncton. We also had a couple of shopping stops and an art gallery stop in Charlottetown before heading home to the kitties. It was great to be away but nice to get home.

Night before last I got a real surprise. During dinner at Dad's I said something about Aunt J. leaving for home on Thursday.

She said, "No, I leave the next Thursday. You booked the ticket. You should know I return on the twelfth."

The first song that comes to mind is You Ain't Goin' Nowhere by The Byrds. It's already up on the pages so I've found a couple more. You Stay Here by Richard Shindell and I Wanna Go Home by The Dells will fit quite nicely.
Posted by Cuidado at 7:33 AM

Fun and funny post, Cuidado, good to see you back safe and sound. Hope you and Aunt J don't starve--but with those generous neighbors of yours you should do find! (Besides, yiou need to lose that extra weight!)

I've decided to feed Aunt J, Ralph. The art lessons are going well and feeding her is the least I can do.

Welcome back. I missed you, but it sounds as if you had a wonderful time. Getting together with family is always great fun.

How lovely you get to have your aunt one more week.

I feel so happy to have been missed, Kat. I was able to stop by your site when visiting my sister. Each blog has it's little community that means a lot to me. I'm very happy to have my aunt. She is feeding my ego telling me how great my painting is after she instructs me in technique. I've decided to feed her that extra week.