Round and Round and Everywhere 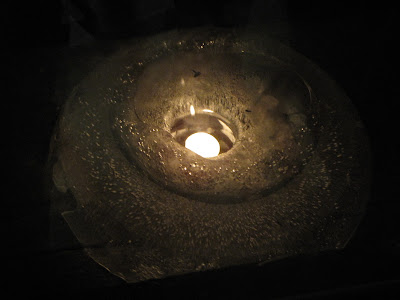 This first week of January week has gone so, so fast! It's hard to believe it's Friday already. I think it has to so with how busy I've been. I've hardly been in the house this week. I had planned to finish up some painting to start some glass work but didn't get much done and nothing finished. Moments ago I got the go-ahead take my car in for the bodywork it requires as the result of last week's accident. The body shop has ordered the parts. Yeah! I'll have a rent a car for three or four days which will be a treat after my old jalopy.

I've been making ice candles but the success of the endeavour is entirely dependent on weather. They won't stay lit if it is snowing or raining and they melt if the temperature gets warm or it rains. I've been having fun with them though. I've promised to make some for some various friends.

I went for a longish but very brisk walk today. I didn't have time for lingering but wanted to get out there. I would say I was speed-walking without the exaggerated arm movements. I know it certainly did the job as far as raising the heart rate to provide a good fitness workout.

I have a nice Celtic/folk style song, Winter Song by Scottish singer, Emily Smith, with it's nice soft sound for one of the songs today. This week has been a beautiful winter week. Since the huge blizzard on the 1st day of the month I've been lots of places and seen incredible snow drifts and sculptural effects that have been really beautiful. My Shutterchance blog had a few nice ones featured.

You can listen to something with more energy too. It's an old timer's song. I grew up with this and other Hank Snow songs. If it was old country, I grew up with it. The aunt I just visited told me once of meeting Hank Snow a long time ago. Her parents were musicians living in Nova Scotia, as Hank was. It was when I had a Phoebe Snow song here that she told me this story. She wondered if they were related. Anyway, here is Hank Snow with I've Been Everywhere. That is the kind of week I've had.
Posted by Cuidado at 4:04 PM

dear cuidado
long time lurker here; i just have to ask how you make those ice candles?
i always enjoy reading you so much, it must be magical to live where you do, thank you for sharing that magic with us all!

Hi Splendid, Glad to meet you. You basically need a container to make a huge ice cube (rectangle, half globe etc) and a solid object to place in the center that will give you a space where water is prevented from entering. A solid ended tube is best and you have to be able to pull it out when everything is frozen. I realize I can't adequately explain it in this comment so perhaps I'll do a post with instructions and photos. You need hard to find objects. Where are you from Splendid?

thanks so much for the tutorial, they really are magical in the moonlight.