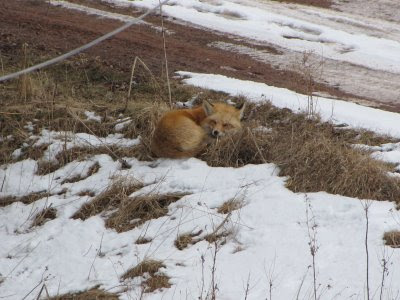 The photo above is of one of 'the foxes'. When I came home from running errands just after noon today, Mr or Mrs Fox was having a nap at the side of the top of my driveway. S/he moved for me to drive down but curled right back up after I passed. I took this shot from the deck before I even opened the door to the house. The cats wanted to go out but I didn't let them till the fox had gone. I watched him/her chasing squirrels and think that is the reason it was where it was. There are lots of squirrels in the vicinity because of the tall trees.

I had a setback with the glass this afternoon. It was glass shattering but not life shattering. I did have to do some regrinding after my wooden jig was made and everything was fitting beautifully. I picked everything up again to wash each piece and broke two pieces at once by hitting them against the counter as I was shaking water from them. I made new pieces and will hope for the best.

Grinding is my least favorite part of the process as I said yesterday. Today's accident required me to take the grinder out for the third time. The problem is that I grind in my kitchen sink and also prepare food there. Using a grinder in a kitchen requires a very, very thorough cleaning process. I'd done it twice already and I now have the cleanest sink and counter area you've ever seen. I forgot to take photos today but not that much has changed except that the plastic is gone and a border (jig) is around the drawing.

Music: Sometimes I make CD's with a specific theme but am feeling entirely different myself. Here are two songs on the one I'm making for myself. Kris Delmhorst is telling us that Heavens Hold the Sun. She is convincing. Patty Griffin always has something wonderful to say and this short song proves it. Here is You'll Remember. It even mentions being on 'this island'.
Posted by Cuidado at 4:14 PM

I wish we could tame foxes because I think they're cute.

I don't really want them around because they are known to attack cats. They are beautidul though and I've enjoyed seeing them even though I'd rather they were not here.

Love the little fox.. It is a lot of work to feed oneself out in the wild!!

I was reading your steps in the last post with great interest.. a glass artist from NS was telling me how much work and steps were needed to create a piece of finished glass a few years ago but I never saw the process... It is quite overwhelming.. it is good to show people how much care is needed so they appreciate it all the more.. you are doing a beautiful job!! and what a job it is!!

Your little icon is a fox, Gwen, so I'm thinking you like them. I have a lot of foxes around the property. I don't feed them but sometimes they sit on the deck and look in at the cats.

Stained glass does have a lot of steps and that is why it was such a fitting art for me. I'm hyperactive and when I was doing production work, could do whatever I wanted for as long as I wanted. There was always something in each step that I could work on. I'm really enjoying the project.