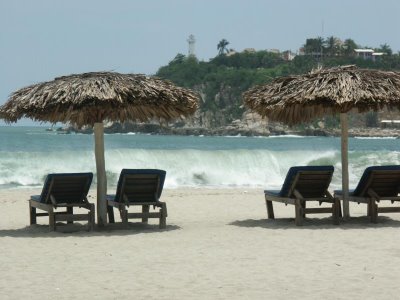 Heck, I love not working! I spent the day doing something fun (for me) and not feeling guilty about not getting anything real accomplished. I certainly have lots to do tomorrow because I took today off but that's ok.

I compiled lists of up-tempo latin music for my niece so that she and her friends can have good music at their latin-themed girls night. I listened to songs I haven't heard for a long time and relived lots of old memories from those sounds. Did music from the computer before lunch then after lunch, cd's. I didn't go back as far as cassettes though.

Hardest for me was that they wanted only up-tempo. If you play my music, linked on the side, you know I love ballads. Latin ballads are a thing of true beauty and are in a class by themselves. What a great day! I still took bookings for work, fed cats, dealt with the regular day to day stuff but feel bathed in good music and I sure do like that.

Music: I'm picking latin ballads because they're what made my heart soar today. Both are from Chevala Vargas. One is Nosotros. The other is attributed to her but has never sounded like her to me unless it was done at a younger age. It was from the Frida soundtrack which I mentioned yesterday when talking about Lila Downs. The song is Paloma Negra and is from the sound track. She would have been old at this time but sounds young. I have this song by Lila Downs also.

The link is also Chevala Vargas. I may have linked to her before, I can't keep track, but she is one of my favorites. She is a legend in Mexico and "one of only two women ever to be awarded Spain's prestigious La Cruz De La Orden de Isabela La Catolica. She was a friend and drinking partner of the late José Alfredo Jiménez. She lived with painter Frida Kahlo." That quote is from today's link.

I was ready to post but went back and changed the photo to my favorite place to sit inMexico.
Posted by Cuidado at 3:54 PM

Thank you for the list of songs. They should do very well for our Fiesta/Girls Night.

And, although I do like the balads, they usually aren't very good for drinking music. That is, unless you're into drinking alone, crying into your Corona. *lol* and that's not what we're looking for this weekend.