Starting To Smell Good In Here 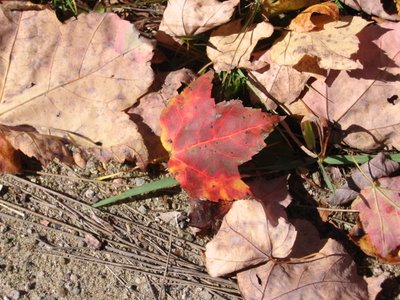 There is meatloaf in the oven and more importantly a dessert. I'll have a bit of the dessert tonight but it's for a little dinner party that I'm having on Saturday. Before dinner we'll get to walk in some great old woods through trails and an old estate deep in the PEI back woods. There are no longer any buildings, only the remains of the old estate such as foundations, mature trees and bushes, and an old root cellar.

I'll be touring with a man who grew up there; it was his grandfather's estate. I've explored there for years, have a long history of walking the trails and old woods roads and cutting and hauling wood from there. My dog once got lost back in there. It's going to be great to see that property through my friends eyes. I've been trying to arrange it for a couple of years and we'll be having apple crisp for dessert.

Had the most fun night at trivia/going away party last night. There were fun gods in the air because everyone in the establishment was having an awesome time. We did badly at trivia but had extra points in the good times category.

Music: Music for fun times. One is a traditional Mexican ballad that has the full horn section. Won't be for everybody. Lila Down's newest album, La Cantina, is full of that old traditonal stuff. Here's Arbole De La Barranca. This one, Hanal Weech, from an older album, was one of the first songs I had of Lila's and made me fall in love with her. I'd never ever heard anything like this before. I've included it in an awful lot of playlists. I'm going to be singing this all night now.

Today's link: I've been going here for at least twelve years. It's called KVAN All Van All The Time radio. It is constantly playing recordings of live Van Morrison concerts. Be sure to check out the Video Vault. Great to bookmark for when you need a Van fix and the whole live music thing....well!
Posted by Cuidado at 4:55 PM

Where is the place you are going is it the road on the way to Bens lake?